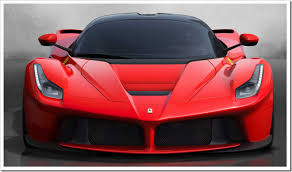 For a long time hybrid cars were a little bit of a joke to the auto-mobile industry. Just in case you didn’t know, a hybrid engined car is one that can run on both electricity and gas. The idea is that as green, renewable energy sources take over the conventional petrol-chemically driven energy outputs, electric cars will make more sense. Believe it or not the first ever prototype hybrid car appeared in the 19th century, created by Jacob Lohner and a number of similarly powered cars were created right through the 1900s. Now however, no one can doubt that the hybrid engined car has finally come of age as Ferrari, the famous Italian supercar powerhouse announced the arrival of their first ever hybrid, the Ferrari LaFerrari. 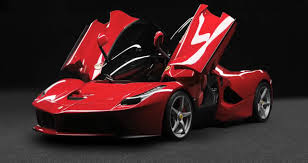 There are a huge number of pictures of this new car available online, which show that the new LaFerrari will stay true to its design roots. Available in the characteristic Ferrari red (as well as a classy black and yellow finishes), which won’t fail to get you noticed on even the most swanky Beverly Hills boulevard, this new vehicle has all the sharp super-car edges in place and  cuts a mean silhouette that oozes power and credibility. As ever, if you want understated elegance, this car is not it, but if you want overblown power and a statement of youthful fortitude, then you can’t do much better.

Everything about the LaFerrari’s exterior is incredibly well styled. Reminiscent of the 1990s feline inspired designs, there’s definitely something of the big cat about this new model. Ferrari have already put up a special website dedicated to this new addition to their supercar family complete with snarling dubstep sounds and glistening clips of the car’s outrageous performance. It sounds like fighter jet and moves with a flair that’s almost supernatural. This body-shell has been specially created to blend the latest advances in aerodynamic engineering with aesthetic values, taking lessons learned in the world of Formula 1 racing and melding them into a road worthy format. 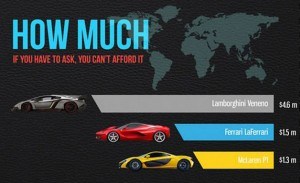 The LaFerrari has been sculpted with a sense of aggression, with the wings swept over the wheel arches, which provides the car with the down-forces needed to glue it to the track at high speeds. The ‘face’ of the car is dominated by the huge air intake that’s necessary for the car to gulp in oxygen to feed the combustive parts of the engine’s operation. On the inside, the driver will get nothing less than Ferrari’s first class treatment, as you’d expect, including a special reconfigurable digital instrument panel, which can be set up to specially suit the driver – whether they’re looking for a day out on the busy suburban roads or a day out roaring round the track.

What about engineering? You can expected a mid-mounted, direct injection 6.3 litre V12. This is a real powerhouse of an engine that’s been developed from the 2012 F1 Berlinetta’s unit, a car which we featured on our blog when it was released to the public last year. This supplies a whopping 963 brake horsepower through special system known as HY-KERS, which guarantees seamless integration between the electrical part of the engine and the more conventional combustion components. This allows the LaFerrari to boast the most impressive and extreme performance figures ever achieved by a Ferrari production car, and according to the Ferrari website, these innovations will definitely filter down through the rest of the range. 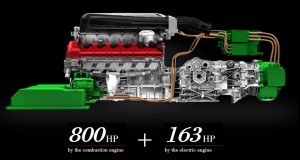 The performance figures that have been posted for the LaFerrari are simply stellar. The beastly hybrid engine absolutely shatters the egos of other sports cars, going from a standing start to 62mph in a teeth crushing 3.0 seconds, and can easily get you to just over 124 mph in seven seconds – this is a car in which you could race F1 cars.

If you want a LaFerrari then unfortunately you’re plain out of luck. The famous Italian supercar giant are renowned for their exclusivity and as ever, won’t be just selling this car from showrooms on the street – if they’ve ever been known for doing such a thing. With a limited run of just 499 models, leaving us to wonder how a company so obsessive about engineering precision didn’t just make one more for a round 500, Ferrari have already received enough pre-orders to sell their production batch twice over. Another smash success, but then what else would you expect?

Sell your Ferrari with Iain Mutch the prestige cars broker that offer the best prices for the best cars with a personal 121 service that you and your car deserve. Get in touch now for a free car valuation by simply filling out this online form.