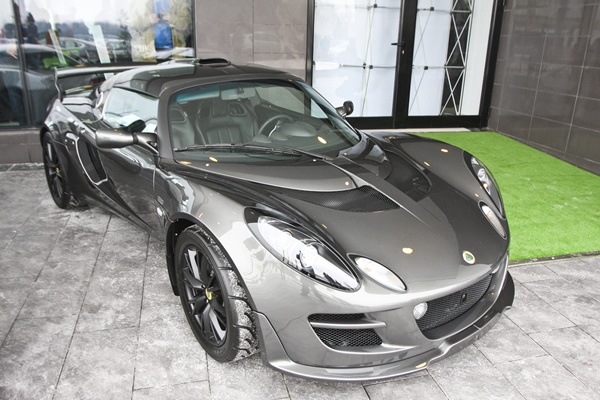 If you like your cars fast with amazing handling abilities, then you’ve no doubt heard of Lotus. This famous UK manufacturer are renowned for their sports vehicles, which handle like grown up versions of racing go-carts – quick, light and incredibly manoeuvrable. After many months of media speculation and industry intrigue, Lotus announced the latest addition to their range, the Exige S, at the Frankfurt Motor show in 2011. This new range includes two distinct models – The Exige S Coupe and their highly desirable convertible, the Exige S Roadster.

The Lotus Exige S Roadster is a damn good looking car. You’ve got the characteristic Lotus headlights defining the front end of its low slung silhoutte, which is accentuated by two distinct ridges running over the bonnet, channelling the aerodynamic flow around the car. The vehicle thins around the cockpit before the long, solid lines sweep pack to the wider rear end of the car, where the  solid spoiler is integrated into the bodywork.

Black leather dominates the interior of the Lotus Exige S Roadster, complemented by polished aluminium details. This sporty two seater has a special removable roof, which according to the manufacturer comes off in an easy, two-click motion, allowing you to get the best of the sun on a bright day. In car entertainment is relatively sparse when compared to some of the luxurious prestige cars we feature on this blog, with a surround sound CD/MP3 player providing background noise to your on road antics, but then no-one’s buying this car for the inside experience. It comes  with a stick shift as standard, but Lotus say if they receive enough interest in a paddle control system they’ll make this an option.

Lotus claim their Exige S Roadster is built for the “adrenalin hungry sports car aficionado”. The car comes with a special bespoke Pirelli tyre package to help your wheels hug the road. There are three drive modes controlled by the vehicles dynamic performance management system (DPM) including sports, touring and DPM off for the truly fearless. If this isn’t enough for you then there’s an option to add a fourth race mode. According to the manufacturer’s website, Lotus Chief Engineer Matt Becker said the following about the car “Anyone who has ever driven an Exige will tell you that it’s not for the faint-hearted. The new Exige S skips a few rungs on the ladder to give the driver the ultimate Lotus experience. Quite simply you can’t get more Lotus than the Exige S.”

To say the Exige S Roadster is fast would be a bit of an understatement. It’s packing an Eaton TVS 3.5 litre V6 engine under the hood, equipped with a special Harrop HTV 1320 supercharger, which supplies the power to the tarmac via a special six speed close ratio gear box. This creates a whopping 345 bhp in a car that weighs in at a very slim 1166 kg – that’s 296 bhp per metric ton. Unsurprisingly this creates some very attractive performance statistics with the car able to move from a standing start to 100km/h in 4.0 seconds and a maximum speed of 223 km/h (143 mph).

Despite the fact that the Lotus Exige S Roadster is a fairly small car, you’re still looking at fairly big fuel consumption stats. Then again, this isn’t the type of vehicle that anyone who’s looking for a green minded option is likely to go for. The engine’s emits 236 g/km of CO2, which puts it into one of the highest tax brackets, and you’ll probably have to spend quite a bit on fuel, as the Exige averages around 28 mpg.

If you’re thinking of buying one of these true sports vehicles, then you’ll be looking at spending just over £50,000 – which is the same price as the Lotus Exige Coupe, when the car finally goes on sale in the Summer. These are truly powerful cars and can take a little bit of getting used to on the road, so for new buyers Lotus are offering drivers academy sessions, where one of their experts can help you get to grips with Exige S Roadster. Of course, these are also a great opportunity for any new owner to take their car out and give it a damn good blow-out round the test track and really see what it’s capable of without the restrictions of the open, public road. And believe us when we say it’s capable of really blowing your proverbial socks off.

Got a Lotus to sell? Contact us, we don’t buy just any old car – only the best, prestige cars. That’s why we can offer the best price.