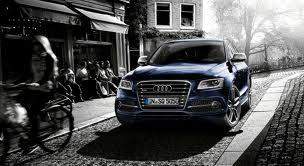 Audi are now recognised as one of the most efficient, solid and reliable prestige car brands around. Like all car manufacturers in recent years they’ve become more and more involved in the SUV market. Although some critics of these so called Chelsea tractors claim that they are boxy and energy inefficient, Audi have released a new vehicle that turns those preconceptions around on their wheels. The SQ5 is their latest entry into this market, setting new standards in both design excellence and performance. Whilst it isn’t the most cost effective car when compared with many of its rivals in the same class, the extra money you’ll need to spend on it really does give you that big bit extra.

One thing we really like about the SQ5 is the understated design. Audi have always been renowned for creating cars that look sleek and sophisticated on the road, eschewing the loud, overstated designs of their Italian rivals in favour of softer lines. The SQ5 doesn’t visually impose like many of its SUV rivals; there’s no heavy chrome and it’s not set to ride high on the road. This is a car for those in the know, not for those with something to show. 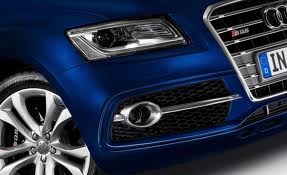 The SQ5’s exterior has been carefully created by the Audi design team to steer well clear of the conventional square box look that’s become a staple of many brand’s entries into the sector. The front grill and light positioning definitely tell you that this is an Audi, with the grill set in the conventional rounded trapezoid shape, which leads back to a long lines that sweep along the body of the car. This is a very sleek vehicle and proof that you can blend utility, power and style into one very attractive package.

Once you’ve opened the doors of the Audi SQ5, you’ll be pleased to see that the car’s interior has been created to perfectly balance the exterior’s sporty good looks. Buyers have a choice of three colours for the high quality Nappa leather sports seats to contrast the Beaufort Oak aluminium inlays on the dash. The car’s systems, including your mobile phone, can be fully controlled from the special S steering wheel, with the option for a special flat bottomed wheel, if you’re looking to further add to the sporty look of the car.

What about interior systems and space? Obviously many people will be looking to purchase an SUV on the basis that it has a large enough interior to cope with the demands of modern life. The Audi SQ5’s wheelbase of 2.81m, one of the longest in this class, gives passengers plenty of leg and head-room. This space is complimented by a special climate control system, which allows you to feel just right on both hot and cold days and you’ll never miss a beat with the ten speaker entertainment system. We’re getting the feeling that once you’ve travelled in this car you might be a bit reluctant to go back into the house. 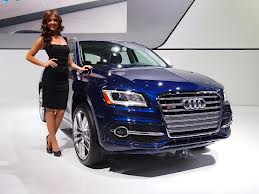 Of course, all you petrol-heads out there aren’t too concerned about the comfort levels of the car. There’s probably just one question on your lips and it more than likely relates to the performance of the Audi SQ5. Well, we’re happy to say that you guys will be more than satisfied here as this car is the world’s fastest diesel driven SUV.  Its 3.0 TDI quattro engine creates a whopping 309 bhp, allowing the car to accelerate from a standing start to just over 60 mph in 5.1 seconds. This is even quicker than a Porsche Cayman. We’re talking about a seriously powerful automobile here. Fuel economy isn’t bad either, expect around 41.5 mpg on the road.

According to the reviews we’ve read online, the Audi SQ5’s big, beefy diesel engine doesn’t kick out a lot of noise or vibration on the road. This is thanks to special sound actuators in the exhaust system. There are a number of drive modes available from the car, including a dynamic mode that gives you increased handling and grip on the corners, and you can turn off all the special features with the normal mode.

So the next question is how much will the SQ5 set you back if you’re looking at buying a new model straight from an Audi dealer? We believe this car, especially when you consider what you’re actually getting here in terms of both luxury and performance, is incredibly priced at around £43,870. Believe it or not this is a great way achieve sporting car speed and acceleration without spending the big bucks or having to sacrifice comfort and space. Another hit car from Audi.

If you’d like to see more pictures of the stunning new Audi SQ5 then visit our image gallery on Pinterest here.

If you’re looking to invest in a new Audi and want to sell your existing prestige car (Audi or not) – then get in touch. We only buy and sell the very best on four wheels so can usually offer better prices than national dealers. So get yourself a free valuation now and take a step towards your new car.

For a free quote – just complete this simple online form and we’ll be in touch.