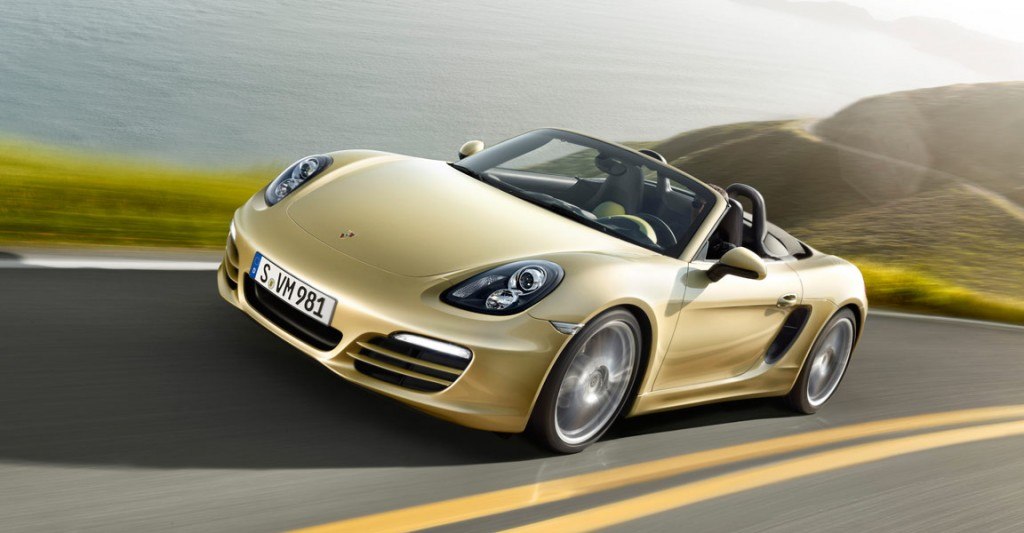 The name Porsche has always been synonymous with prestige cars. Ever since father and son team Ferdinand and Ferry Porsche created the first 356 back in the 1940s, their cars have raised eyebrows and drawn in breaths on roads and racetracks everywhere. They’re constantly updating their range to make use of their latest engineering and design innovations, two aspects of their work that have been clearly embodied in the new Porsche Boxster.

The new Boxster is one hell of a good looking car. The design of the front end clearly draws inspiration from the iconic Porsche race cars of 60’s and 70s. You can almost see the power of the car when you look at the 2 large air intakes sitting in its bonnet, giving you an idea of the air the engine needs to gulp down to propel its powerful frame down the tarmac. The designers have also give it large wheels, around 20 inches in size, adding to it’s imposing character and understated aggression.

As with all Porsches, the Boxster is superbly contoured with aerodynamic precision. The windscreen fits perfectly in with the car’s lines, helping form the stylish curved wedge shape that’s been honed on the test tracks of Europe. One of the real talking points of this design has to be the rear wing. This spoiler sits seamlessly as part of the car when retracted, then deploys automatically to add traction to the real axle at high speeds. The final touch is the dual exhaust pipes, which sit perfectly in the centre of the rear of the car, again suggestive of the snarling energy hiding behind its sleek exterior.

So what’s the Boxster like under the hood? Although it’s not the fastest or best accelerating prestige auto-mobile you’ll find out there today, it still packs a lot of engine power. It comes equipped with a 2.7 litre flat six engine that benefits from Porsche’s direct fuel infection system. This gives it the power to go from 0-60mph in 5.8 seconds. It can achieve a top speed of just over a 160 mph, which is around the average for its class.

When selecting your Boxster you can choose the special Porsche Stability Management system as an option. This clever computerised suspension system offers a number of different modes where the stability of the car will be continuously adjusted, via the damping effects of the shock absorbers. The engine output can be streamlined with the special Porsche Torque Vectoring system that optimises performance at high levels – one to select if you’re looking to take the car out to track weekends.

Finally, what’s this car like to sit in and drive? Well, we’re yet to actually get behind the wheel of one of these prestige cars, but from the reports we’ve read it’s really quite something. The racing styling of the car carries over to the cockpit, where the driver sits perfectly positioned behind their steering wheel. The interior of the car has been created in a full, lush colour scheme that contrasts and compliments the exterior shades perfectly.

The Porsche Boxster is a car that’ll please the eye with its looks and your heart with its performance, but won’t break your bank balance with its price-tag. The most inexpensive models start around  £37,589.00 allowing you to get a taste of sporting car perfection at a very reasonable cost.