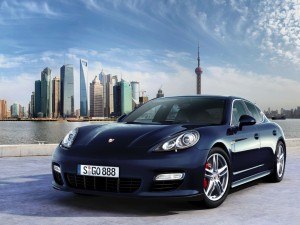 Only last week we spoke about the BMW X6, today we look at one of BMW’s keenest rivals – Porsche.

Want to see more pictures of the Panamera – click here to view our Gallery.

Or watch our Panamera video on YouTube by clicking here.

Can the four door Porsche Panamera still do what’s expected of a Porsche?

Porsche arrived at the Panamera project determined to ensure its official take on the four door GT did not dilute the brand’s reputation for sportiness. It delivered that promise!

Porsche produced a four seat, four door car which although did not endear itself completely to either Porsche’s customer base or the luxury segment, took both to places they’d never been to before. With the facelift in 2013 designed to keep the sales ticking over, the model succeeded its own expectations worldwide with China now the biggest market for the Panamera.

The new addition to the line up is intended to make a huge impact. The E -Hybrid is now a petrol-electric plug-in model capable of around 20 miles on electric power alone thanks to a newly developed battery. Porsche claims a total output of 410bhp 3.0-litre twin turbocharged V6 mated exclusively to a PDK dual clutch automatic transmission. The seldom seen manual has been discontinued. 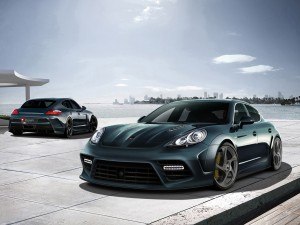 With regard to the styling Porsche says all of its cars use styling cues taken from the 911 as their basis and the Panamera is not different. The shutline of the Panamera’s bonnet for example, and the high set front wings, are obvious 911 traits, as is the falling side window line. On almost all hatchbacks the downward curve is reversed at some point by a boot lip or spoiler, but not on the Panamera.

Its the way the roofline curves that’s the most controversial – and, to the eye, the least successful element of the design.

For the 2013 facelift, little happened that will alter the Panamera’s silhouette in a layman’s eyes, but for a Porsche designer, the changes are significant. At the front there are now larger intakes and the linework has been tweaked for a more dynamic appearance, aided by the all new headlights.  The rear number plate has been relocated giving a clear differentiation between generations, along with a wider windscreen and bigger clusters. The main result is a broader across the beam backside! But, not necessarily cuter.

As before all Panamera’s get an automatic pop-up spoiler, but the Turbo and the GTS’s are more extravagant, not only rising but also sprouting two winglets that sweep outwards as it extends upwards. The Panamera’s interior finish has been executed to a superb standard in terms of perceived quality.Porsche has nothing to fear from any car with a list price of less that£100,000! The other debutante first seen on the 2013 facelift is far easier to like. 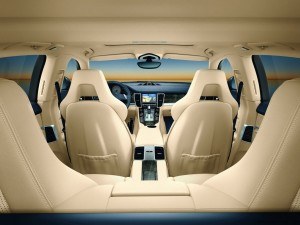 The 3.0-litre V6 is essentially a fettled, downsized and twin-turbocharged version of the 3.6, and it feels impeccably well honed for the job in hand. The V6 is just as refined on the motorway as the V8. Its possible that returning buyers will miss the old V8’s braggadocio when pushing on, but if maximum attack is your default position, then the GTS is still the superior choice.

The stats are faintly ridiculous, 8.9 sec to 100mph, quick enough for you? – but then so is the car. The Turbo as it is elsewhere, is a statement of incredibly muscular intent. As it was meant to be, the E-Hybrid makes for an attractive prospect if you live in or commute to central London. With CO2 emissions of just 71g/km, the model dips under the 100 per cent discount threshold deliberately set at 75g/km to benefit the new generation of plug-in hybrids.

The new S model doesn’t suffer much for the loss of the V8, but the emphasis on a certain level of commitment – still necessary if you want to fully appreciate the car’s point – means its the GTS and Turbo that endure on the fantasy shortlist for those with four seats to fill and continents to cross.

We recently bought a Porsche Panamera from a customer and we can do the same for you if you are looking to sell your Porsche. We offer a completely different service to other car buyers because we come to you and give you an accurate valuation face to face rather than without even seeing the car.

If you want your Porsche valued and bought just complete this valuation form.