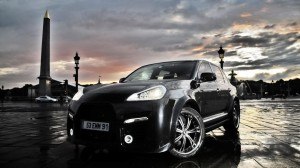 A review of the Porsche Cayenne today after our most recent piece on the all new 2014 Range Rover Sport! There have been rallying Porsches and many four wheel drive models including the most famous of all the Porsche 911. In 2002, the first Porsche SUV arrived in the dynamic Porsche Cayenne. This was developed alongside the VW Touareg, allowing Porsche to share some of the costs with a manufacturer that was then just a technology partner.

The first facelift came in 2007 after which Porsche’s first diesel was introduced. This is the second gen Cayenne along with which came Porsche’s first production hybrid.  There are five engine flavours for the Cayenne. They range from a petrol V6 through to a storming turbocharged V8, (with sub 5.0 secs 0-62mph time) and again include a diesel. Most intriguing though is Porsche’s first hybrid, although its not being billed as an eco hybrid – the diesel emits less CO2. Instead, the hybrid is still a performance car, what is what you would expect from Porsche. With a 46bhp electric motor mated to a 329bhp, supercharged 3.0-litre V6 petrol engine, the Cayenne hybrid can reach 62mph from a standstill in 6.5 sec, very impressive! 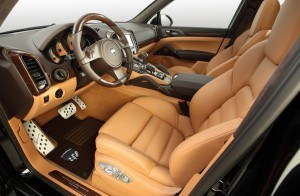 As successfully achieved on Porsche’s 928, some chamfering around the edges and corners of the Cayenne makes the car look smaller than it is. Would you believe the new car is 48mm longer, 11mm wider and 6mm taller than before? The sloped rear window helps to reduce the perceived bulk of the Cayenne, but it marginally cuts into the available boot space. The rear spoiler improves aerodynamic efficiency. If there is one thing that Porsche has learnt over the years, it is how to build a proper luxury interior. The original Porsche Cayenne lacked both style and quality in its cabin, but there’s no chance of that here. The new cockpit is a brilliant success. Praise too for the eight speed automatic, there are left down, right up steering wheel paddles behind a superb sized steering wheel thats the introduction to a fine driving position. 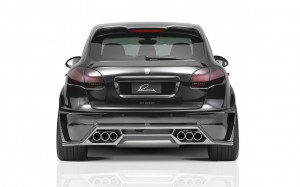 The rear of the car is versatile, with room for three abreast in a back seat that slides back and forth, and splits and folds. The sloping rear window has a very marginal effect on the Cayenne’s practicality – we can imagine most owners preferring the defter looks to an extra few litres of volume – and the boot is otherwise large, with well shaped walls. The highlight of the Cayenne range remains the Turbo.

Its twin turbo 4.8 litre V8 delivers 500bhp and a sturdy 516lb ft of torque, so its got more reserves than many of its competitor supercars and more pace than the old Cayenne Turbo, according to Porsche’s claims. the diesel is surprisingly good too. A 0-62 time of 7.6secs makes the V6 petrol model redundant, unless a little diesel rumble really puts you off! And with an average economy of 39.2mpg and emissions of 189g/km, do we need say anything else!! So……., here’s a sign of how the Porsche Cayenne has improved over the years, the Cayenne hybrid has almost as much performance as the first ever Cayenne Turbo, yet similar economy to the Cayenne diesel.

This can only mark it out as a great success, and a significant improvement over its predecessors.

Porsche are one of our most popular cars and we have bought many off of customers, for great prices. If you’re looking to sell your Porsche – then get in touch today.