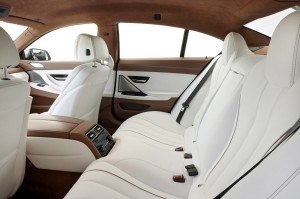 For a couple of decades, much like Burberry, BMW appear to have lost their classy edge. Especially when you compare them to their main Teutonic manufacturing rival, Mercedes Benz. However, just because they’ve got mass appeal, which in our opinion is no bad thing, this doesn’t mean they don’t still know how to make an absolute winner of a motor-car.

Although BMW are clearly following the lead of the Mercedes Benz CLS four door coupé that arrived on our roads in 2005, they certainly aren’t letting their late entry into this fight limit their offering. Their new 6-series Gran Coupe has been attracting a lot of attention in the press, with many reviewers claiming this could well be one of the best cars to own over the next few years.

Looks-wise, this new model cuts a very stylish and sporty silhouette on the road. It’s perfectly balanced on the tarmac, with an aggressive, almost bullish, nose that’s clearly based on the shark like design of its two door predecessors, giving the Gran Coupé a real sense of presence. There’s the option to add on a special M Sport kit, for which BMW are anticipating a high demand, which adds all a whole range of darkened trimmings, such as a darkened tail-pipe on the exhaust and black brake callipers.

We’ve not been lucky enough to sit behind the wheel of any of the Gran Coupé models yet, although we’re definitely going to take advantage of any offer to get behind the wheel of this good looking car. Hence we’ve had to rely on the jungle noises from the trade to get an idea of how it performs. The initial feedback is excellent with some of the top critics describing the driving experience as simply brilliant. They claim it grips the road well with a perfectly balanced chassis leading to an easy drive, even in tight corners at higher speeds.

All cars in the range pack one hell of a performance punch underneath the bonnet. They’re all artificially limited in speed to 155 mph, just in case you fancy taking the family car down to Silverstone for the weekend. There’s a choice of three engines available, two of which are petrol driven, the 316 bhp 3.0 litre straight six and the slightly more powerful 444 bhp 4.4 litre V8. However, its the diesel 3.0 litre twin turbo 309 bhp engine that’s set to be the most popular (BMW’s marketing dept. believe that this will make up most of the sales).

The main problem with the BMW Gran Coupé  according to the critics, and in all fairness this is actually quite a small complaint, is that the wheels are a little bit form over function. Yes, these big alloy rims do look quite the part when calmly prowling down the inner city high grade tarmac, but the small tyre is not said to do so well when bumping over the rural pot-holes. No dice really indeed when you consider all that’s right with this car.

What about the stats for the 6-series Gran Coupé? Apparently they’re not the best economy car on the road, putting in around 42 miles to the gallon, but if you can afford the £61,390 you’ll need for a new model then you probably won’t be too worried about petrol costs as you pull away from the dealership, getting up to 60mph in just over 5 seconds.

This car is clearly perfect for the driver who wants to have his cake and eat it. Whilst it’s well suited for those looking to transport four people in some luxury, it also manages to capture the hearts of the performance junkies out there who’ll love the power behind the wheel. In our opinion BMW have a real success on their hands with their 6-series Gran Coupé.

Got an BMW that you want to sell? We buy BMW with 2008 plate on – they do need to be in good condition with low miles. But in return you’ll get a great price. Complete this valuation form to find out how much your BMW is worth.