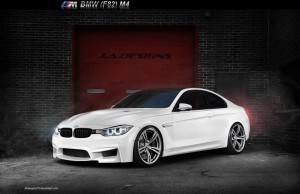 In our last blog we talked about one of Britain’s greatest car manufacturers Jaguar and their wonderful new F-type, now we move across the waters to review one of Germany’s prime franchises – The BMW 4 Series.

It will be a little larger than the 3 Series both in length and width. The dimensions: length 50mm  and the track widened by 45mm at the front and 81mm at the rear. The lowness also might be due to what we’re guessing are the deeper than stock front and rear fascias. It is current fashion to make a car’s bodywork look like metal skin stretched tight over bone and muscle! Straight panels are passé.

Also the 4 Series concept has something called, and we’re not making this up, an Air Breather. This, it turns out, is the vent behind each front wheel that is ‘aerodynamically effective’ at affecting the aerodynamics in some way that’s better than the adhesive-backed kind you would buy at Pep Boys!

The interior gets some fine looking chestnut wood trim and leather seats, tanned in an environmentally friendly way and then trimmed with braided leather strips. The braided leather also finds its way to, of all places, the insides of the cup holders, which really does not make any sense whatsoever! The initial photographs taken showing a set of gold coloured calipers would suggest that this 4 Series features the M Carbon Ceramic brakes.

The most obvious evidence of the extra £3k over the 3 series is in the amount of gear/kit included on the 4 Series. The SE model for instance will feature full leather upholstery, cruise control, an electric boot lid and heated front seats – these options are all at extra cost on the current 3 Series. Parking sensors both front and back, dual – zone air-con, bluetooth and DAB are also included. The six-cylinder will also get full electric front seats and metallic paint thrown in!

The 4 Series goes on sale from October 2013 initially only in the 428i, and 435i and 420d options, with the other engines due in November. All are offered with an eight speed automatic gearbox, including launch control. As for the M4, rumours indicate that the M4 engine will be powered by a S55 3.0 litre six cylinder with an output of 415 horsepower! A BMW dream!

For more stunning pictures of the new BMW 4 Series – click here to visit our Pinterest board devoted to this beautiful car.

If you’re looking to sell your old BMW and upgrade to a new BMW 4 Series – then we here at Iain Mutch can take the hassle out selling your BMW. We specialise buying prestige cars with a 2008 plate of later.

That’s why we always say “we don’t buy any car” we only buy the best and that means we can offer you a much better price.