The all new Alfa Romeo 4C arrives this month! 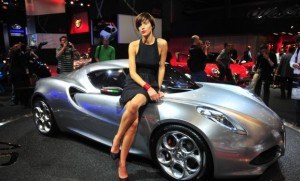 Today we shift to one of the worlds greatest designers, Italy. Not only is Italy known for its high end fashion designers, its fine wine and of course the home of the Ferrari. We take a look now at one piece of Italian Design, that in our opinion one should experience at least once in a lifetime. The Alfa Romeo. Over the years, Alfa Romeo has often experienced a few bad press reviews, mainly due to perhaps less than perfect materials or construction. This however today is no longer an issue. Alfa Romeo now produce the Mito and the Giulietta in the UK, but now all excitement is now focused on the eagerly awaited Alfa Romeo 4C which is just days away! The all new 4C sports car should have arrived in the UK showrooms during August for delivery in September 2013.

For more pictures of the Alfa Romeo 4C – visit our Pinterest gallery here. 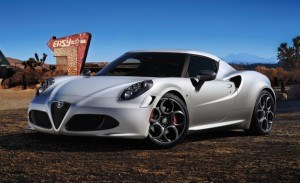 This unique sports cars will weigh in at just 895kg which is only 20kg more than the Lotus Elise. It will produce impressive power with its new 237 bhp 1.75 litre turbocharged four cylinder engine, which means a power to weight ratio of 268 bhp per tonne! Very very impressive! The full carbon fibre tub weighs just 52kg. Alfa Romeo has employed similiar technology to that used in Formula One. To increase strength but reduce mass. Extensive use of aluminium has helped keep the car as light as possible. The construction of the new engine and twin clutch transmission weigh in at 135kg. Thats a saving of more than 24kg over the current 1.75 engine from the Alfa Romeo Giulietta hatchback! The brake discs are aluminium, the 4C’s glass is thinner, by an average of 10mm, which means its 15 per cent lighter than conventional glass. 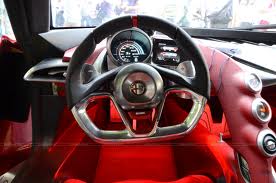 The performance and efficiency should be strong too, The 4C will race from 0 to 60 mph in an impressive 4.5 seconds helped by the engines 350Nm of torque, while the head of Alfa Romeo Europe, Louis-Carl Vignon, confirmed that it will return more than 40 mpg and emit around 150g/km of CO2.

Non power steering (a surpise), should improve feel and feedback and the car will be more extreme than a Porsche Caymen, while also being a useable day to day machine” according to the head of Alfa Romeo engineering.

Prices we believe are now finalised with the limited run 4C edition likely to start at around £50,000, with delivery imminent. The launch edition will come with a carbon fibre bodykit with a boot spoiler, door mirrors and headlight clusters finished in the same material. Dark alloy wheels and front air intakes, a sports exhaust and a firmer suspension setup will also be part of this special edition, as will the interior stitching. The Launch model will also feature the same engine as the standard car but with an extra 5 bhp taking the total to 237 bhp. The top speed also the same as the standard car, which Alfa claims to be more than 155 mph! Alfa will produce 3,500 4Cs per year, with 1,000 of those destined for the European market. Only 1,000 examples of the Launch edition are being built, with only 400 coming to Europe.

This will also be the first mainstream Alfa Romeo sold in the U.S. since 1995, and is purported to be only the first in a range of five new Alfa models set to launch in the next few years.

According to a leaked internal product plan, Alfa plans to introduce a successor to the 159, a new Spider, an SUV, a five-door MiTo, and a rear-wheel drive flagship aimed at the BMW 5-Series.

If you’re looking to buy a new Alfa Romeo and need to sell your existing car – then we are the people to help. Simply fill out this valuation form and we’ll get right back to you.