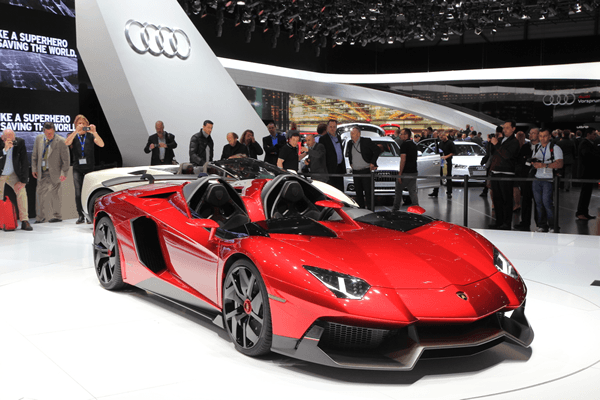 Alongside Ferrari, no other brand makes you think of super-cars quite like Lamborghini. This company designs, implements, engineers, tests and sells some of the best vehicles in the world. They are by no means mass-producers – in 2011 they produced under 2,000 cars, which means that you have to go some distance to get your hands on one. This low number is reflective of the amount of care and Italian passion they put into their work, ensuring that each of their productions is up to the same standard as a Michelangelo painting.

In 2011 Lamborghini released their flagship car, the bright orange coloured Aventador, apparently named after a famous Spanish fighting bull. This should give you an idea of the aggressive engine power concealed underneath the sleek exterior of its space-aged construction. In March 2012 this manufacturer announced that they were going to produce a special edition Aventador, known as the Aventador J Unica. It takes everything that the original stands for, and like a Spinal Tap amplifier, it turns it up to 11.

The bad news is that Lamborghini only made one of these cars. Who knows how much money they had to sink into producing it, as we can only hazard a guess as to whether or not they received their money back when they sold the car at auction for a whopping $2.76 million. This means that we’re never going to get to test drive this awesome vehicle – in fact we’ll probably never even get to see it. That doesn’t mean that we can’t dream of what it might be like to sit behind the wheel.

Obviously we have seen many pictures and schematics of this car. The first thing you’ll notice about the Aventador J Unica is the incredible exterior. It may not be to everyone’s taste, and it may be mistaken for a Ferrari, as it’s only available in a shade of red that’s not too far off the signature Ferrari colour. One thing’s for sure however, which is this is a car that’s going to get noticed.

It almost looks as if Lamborghini have forgotten to put an adequate windscreen on the Aventador J Unica and have literally lost the roof in their quest to make the car even lighter than the original Aventador, which weighed almost the same as a Ford Mondeo. The car’s seats are moulded like two formula one driver’s enclosures sitting next to one another, and in most of the shots that we’ve seen the driver is wearing a crash helmet. This probably not a style decision, as we’re quite doubtful of whether or not he’d be able to see without one.

Apparently this isn’t just an exercise in style over substance. The whole body is actually put together as one piece of hardware, known as a monocoque. The seats and interior are part of the exterior bodywork, in a revolutionary move by Lamborghini. Every single part of this design serves a purpose, for instance the little fins underneath the headlights actually work to cool the front brakes. What you’re actually looking at is a very clever design that’s managed to mix the most cutting edge aerodynamics with functionality. We can only speculate as to whether or not this design has been created to test out features that we’ll see on all Lamborghinis in the future.

Lamborghini were so keen to keep this car a secret from both their competitors and the press that they never took it for a test run, making it difficult for us to provide you with the top performance metrics for the vehicle. We can tell you however that there’s an absolute beast of an engine sitting under the high-tech exterior. You’re looking at a whopping 6.5 litre, 700 horsepower, V12 engine that supplies power to all four wheels of the car via a special independent shifting-rod transmission.

As for fuel consumption and other running costs, we can only wonder as to what these might be, and in our imagination they’re anything but cost effective. Still, this isn’t the kind of car that’s been sold and bought already because the owner is looking for a cheap little city run around. This one of a kind, work of art represents the epitome of modern car design. It’s a shame we can’t get any reports on what its like to drive, but if you are the proud owner of this vehicle and by some rare chance you’re actually reading this article, then get in touch as we’d love to take the Lamborghini Aventador J Unica for a test drive. Even if it’s just down a straight piece of road!

Obviously only one person has got their hands on the Aventador J Unica – but there are plenty of other prestige motors out there.

If you need a hand selling your car – then we can help with a free valuation. Just fill out this simple form and we will arrange to come and see the car at your address and give you an accurate valuation based on your car not what Glasses, Parkers or WeBuyAnyCar say.