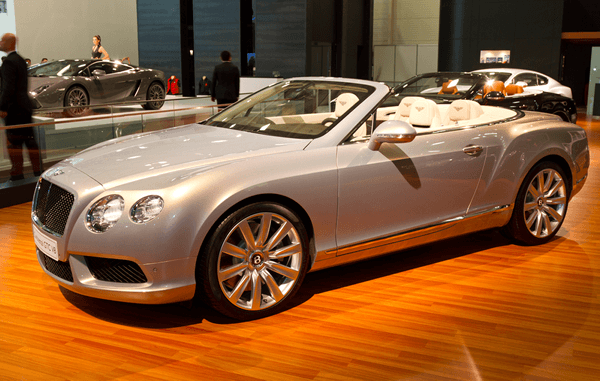 When you think of prestige cars, Bentley is definitely one of the makes that springs to mind. This quality British car brand has a heritage that encompasses nearly a hundred years of design excellence. They started off life as an aircraft-engineering company, creating the engines used to power the classic WWI fighter aircraft The Sopwith Camel. Following the war they lent their hand to  auto-mobile manufacturing, coming up with a range of cars that dominated the famous 24 hour race at Le Mans.

Owning a Bentley is definitely a mark of both status and success, considered to be in the same league as another famous British car, The Rolls Royce. Bentley have just released a new saloon car, The Continental GT V8, keeping up with new developments from rivals such as Jaguar and BMW, who have both recently released new V8 models for 2013.

The Continental GT V8 is a car that manages to combine both the classic Bentley look with a more modern silhouette, creating a strong, impressive shape that dominates the road and is suggestive of the awesome power that sits underneath the bonnet. As with many cars of the moment there is a definite and deliberate incorporation of the classic 1950 roadster styling, blended precisely with its classic prestige car flavour.

High-points of the exterior design include the aggressive lower bumper, with its three large air-swallowing intakes, sitting below the characteristic front grill. It is interesting to note that the ‘knife edges’ on the front of the car are made with a special technique called ‘super-forming’ where aluminium is heated up to 5000 degrees celsius and bent into shape round a special die.

Just as the exterior of the Continental GT V8 has been made using new technology, the interior of the car celebrates design standards that have made Bentley cars what they are over the years. This manages to capture the vehicle’s sporty feel without compromising on driver and passenger experience. The whole inside is modelled on the classic Bentley Flying V, with a specially selected wood veneer created from the dark fiddleback eucalyptus and leather seats, creating a sense of unrivalled luxury.

Let’s take a look underneath the bonnet of the Bentley Continental GT V8. You’re looking at  a 4.0 litre, 500 bhp V8 engine, which provides power via a smooth, computer controlled 8 speed automatic transmission system to a continuous all wheel drive system, allowing the car to excel both on the straight and round corners. This gives the car some pretty devastating stats – a top speed of 188 mph with the ability to accelerate from 0-60 mph in 4.6 seconds. This vehicle really does have it all… Sports car like performance with the luxury of a top British brand.

Finally there’s the small matter of the cost of the new Bentley Continental GT V8. It’s available on the road at a cash price of £133,890, and you’ll be looking at a deposit of around £10,000 in order to get on the waiting list. Once you’ve got your hands on this fine prestige car, then as you’ve probably guessed there’s the small matter of the fuel costs, with the car managing an average of 27.9 miles to the gallon.

Still, if you want to own a real slice of new school engineering and power wrapped up in a package that suggests elegant luxury and a dash of opulence, you can’t do much better than a Bentley. This is a car that will make heads turn for the right reasons as it cruises down any street, attracting gazes and stares through style and statement. An investment for the ages, this Continental V8 GT is sure to be a hit for many years to come.

For more pictures – visit our Pinterest board where we’ve collated the best Bentley images from across the web.

Looking to sell your Bentley? We pay the best prices for used Bentley’s – get a valuation on your Bentley by simply completing this form. Our service is personal, face to face and we come to you.