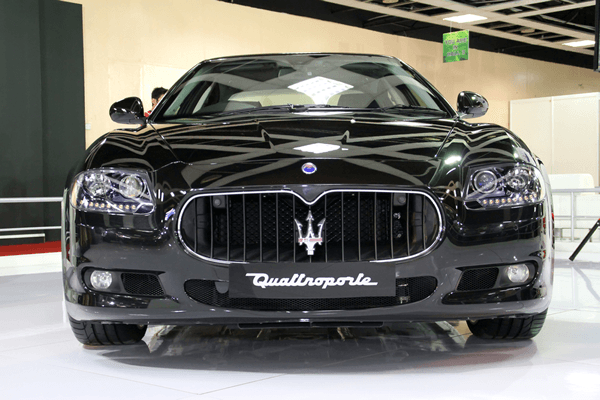 Maserati are one of the most recognisable car manufacturers on the planet. Their trident emblem is up there with the dancing horse of Ferrari, one of their fellow Italian car manufacturers. This company perhaps enjoyed their high-point in the 1950s, which saw the Argentinian driver Juan-Manuel Fangio take his 250F to the 1957 World Championship. Since then a number of different owners dragged them in different directions, until Fiat acquired the company in 1993. They’ve re-established the brand and are now really attacking the market with their new take on the Maserati classic, the Quattroporte.

Even though the Maserati Quattroporte won’t be officially available until after the famous Detroit Motor show, which is scheduled for mid January 2013, there’s already a lot of noise about this car coming from the critics on the web. It seems the company’s PR department are in full effect and that  they’re keen to push this vehicle, probably in accordance with sales targets announced in Spring 2012. This move to increase their market share has come since Italian car giant Fiat acquired the company’s Modena manufacturing plant and have invested almost half a billion Euros to upgrade it for modern luxury car production.

The previous Quattroporte was quite a car. Although it failed to distinguish itself commercially in a niche that’s currently over-run by the big German manufacturers, BMW and Mercedes Benz, the reviews it received recognised its excellence. It was the only Ferrari powered, rear-drive Italian luxury sedan car available at the time, instantly endearing it to a fan-base that appreciated the very best in Italian sports engineering.

To make sure that the Quattroporte comes up to standard, Maserati have employed the famous Italian car designer Pininfarina, who’ve had their fingers in many designs over the years, working with such prestigious names as Ferrari, Cadillac and Jaguar. The fact that they’ve been brought in here to work on this new vehicle from Maserati should been seen as a statement that this is going to be a car that will definitely turn heads and make a mark for all the right reasons.

Here are some more images of the Quattroporte – gallery >

Looking at the Quattroporte technical stats, it’s shaping up to be quite a car. It comes with a specially noise-reduced eight cylinder, 4.2 litre engine built out of aluminium, silicon and  forged steel. Fuel is supplied via the computer controlled injection system, which can dynamically respond to the car’s performance in order to ensure that it always stays within emission guidelines. A pretty smart piece of kit by all accounts, apparently also giving drivers one hell of a good ride. The engine’s power is supplied to the point where the rubber hits the road via an automatic transmission  gearbox. This comes with two modes – sport, which is best when looking for the highest performance from the car and low grip, which helps the driver in dangerous conditions, such as on icy roads or muddy tracks.

Unfortunately we’re unable to give you the current pricing across the range of Quattroporte models proposed by Maserati, but we are able to give you some of the outstanding stats. The car is capable of a whopping 167mph, which is getting on to the speed of many top end motorcycles and can pull away from a starting stop to 62mph in just over five and half seconds. As you’d expect the fuel consumption isn’t that great, but at just over 19 mpg its still preferable to driving round in a tank or a big four by four.

From all the hype and pre-release reviews we’ve seen on the internet, it seems that Maserati are pretty pleased with the job they’ve done on the Quattroporte. Now it’s just a case of waiting to see what the rest of the world think via the sales of the car when it goes out for general release early next year. Now we’re no clairvoyants, but we think its going to do very well.

In case you didn’t know – Iain Mutch are independent car brokers, offering a unique personal service to those people with prestige vehicles that they are looking to sell. Get in touch now to get a valuation for your car.